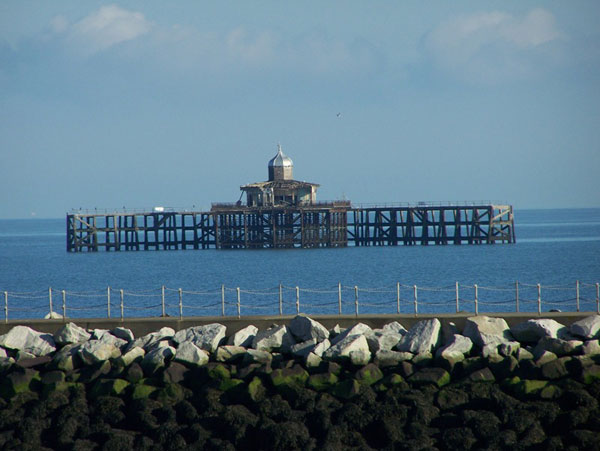 George Burge, a well known contractor, had been working with Thomas Telford on St Katharine’s dock in London, so when the idea of a pier or a landing stage was suggested for Herne Bay, he asked Telford to design such a structure. A survey, dated November 1830, bears the signature of Thomas Rhodes, as well as Telford.
Most significant is that Rhodes had trained at first as a carpenter; therefore the structure was destined to be made of wood. A subcontractors’ list which still survives shows a total of £47,000 out of their estimated cost of £50,000 being promised . The first pile was driven on July 4th 1831 and the construction proceeded at a rate of some 200ft a month until it reached its conclusion at 3613 feet. The pier lasted around thirty years, but the ravages of the teredo worm and weather caused it to be torn down.

This quickly proved unsatisfactory because steamers could no longer use it.

A third pier, 3787 feet long, was opened on 14th September 1899 complete with a rail track that enabled trams to travel from the pavilion to the head. It prospered up to the outbreak of the Second World War when soldiers posted to Herne Bay to construct defences against possible invasion took out two sections of the pier, one about a third of its length from the shore, and the second at about two thirds along.

By the time it was resurrected for use in peace time, it had suffered so much damage that it was deemed beyond repair. In 1968 insurance was withdrawn and the pier closed. Two days of easterly winds in 1978 completed its demise when high seas smashed so much of the centre section that it had to be demolished.