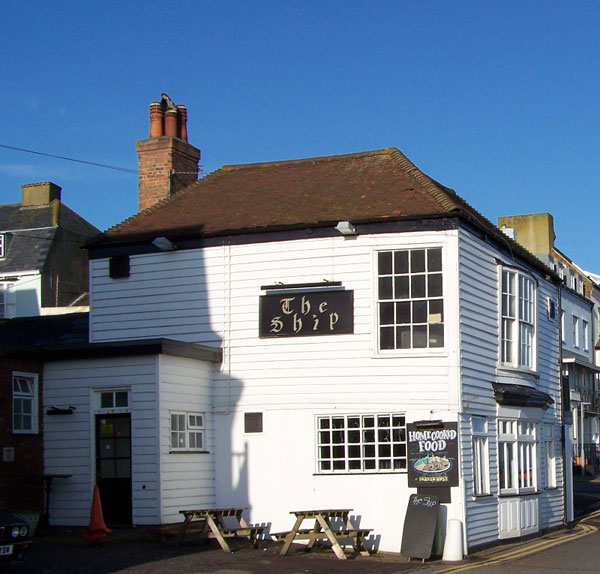 The Ship Inn, with its history traceable from the eighteenth century, stands where the road from Canterbury reaches the shore. It was here that wagons loaded with farm produce went down to the beach at low tide and their produce would be loaded onto “Hoys” – a type of barge, for transport to the Medway towns and London. These boats would then return with cinders and other waste such as small pieces of coal, cinders and ash, left from the production of bricks, as well as the dung from the thousands of London stables for fertilizing the surrounding farms.

The Ship was an essential watering place for the men employed in the trade because water was generally unsafe to drink. A few yards to the east were the seawater baths and bathing machines, which were coming into fashion.

By 1800, when the whole country was under the threat of a Napoleonic invasion, a battery of guns and a squadron of mounted troops were stationed on the Downs, and to provide a place of entertainment for these men, a weather boarded assembly room was added to the inn.

In those days it was common practice to smuggle brandy, gin, lace, tea and tobacco, and it was here that on April 21st 1881, midshipman Sydenham Snow, who was in charge of the Coastal Blockade Service in Herne Bay, chanced upon a group of men running a cargo. With consummate bravery he challenged them with his pistol, which subsequently misfired and he, himself, shot down. He died three days later from his wounds and is buried at the foot of the tower at St Martin’s church, Herne. Nobody was ever found guilty of the crime.