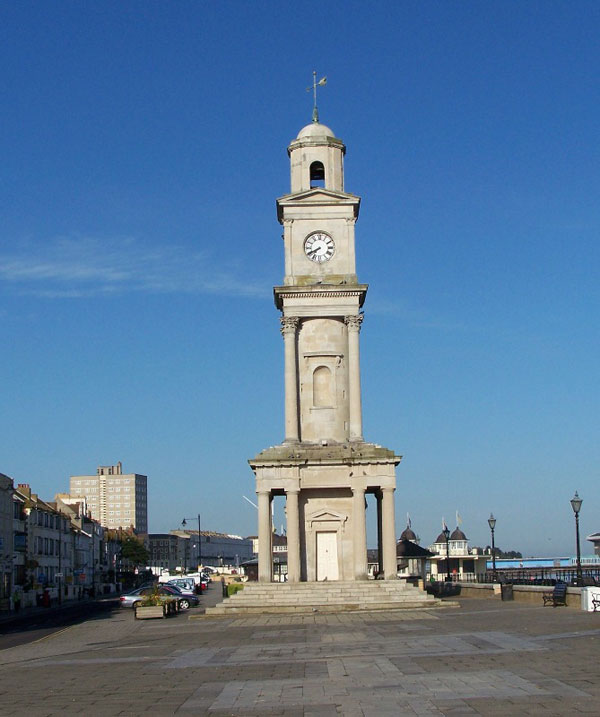 Herne Bay’s Clock tower is surely the most striking piece of architecture in the town. It was the gift of a widow, and great benefactor to the town, Mrs Ann Thwaytes who, when visiting Herne Bay, lived at No 30 Marine Terrace. She had first suggested a Grecian Temple structure with a clock at its apex and an architect, Mr E J Dangerfield, was asked to submit a plan. The idea may well have come from an insurance fire badge which was affixed to Mrs Thwaytes house.
The Guardian Royal Exchange badge has a tower depicted on it which is identical to the clock tower. The foundation stone was laid on the 3rd October 1836, and the tower, with a brick interior and Portland stone cladding was completed by October 5th 1837.
It stands some 82 feet high to the weather vane, and cost some £4000. On its northern face a memorial plaque has been placed to commemorate the men of Herne Bay who volunteered for the Boar war, there being insufficient standing troops, volunteers were needed.
Each side of the plaque on the walkway are two cannons on wooden trucks, they were dredged from the sea bed when the town’s third pier was being constructed and they are thought to be Dutch in origin. They were used for firing blank shot as a fog warning on the pier.